‘A Community of Communities’ 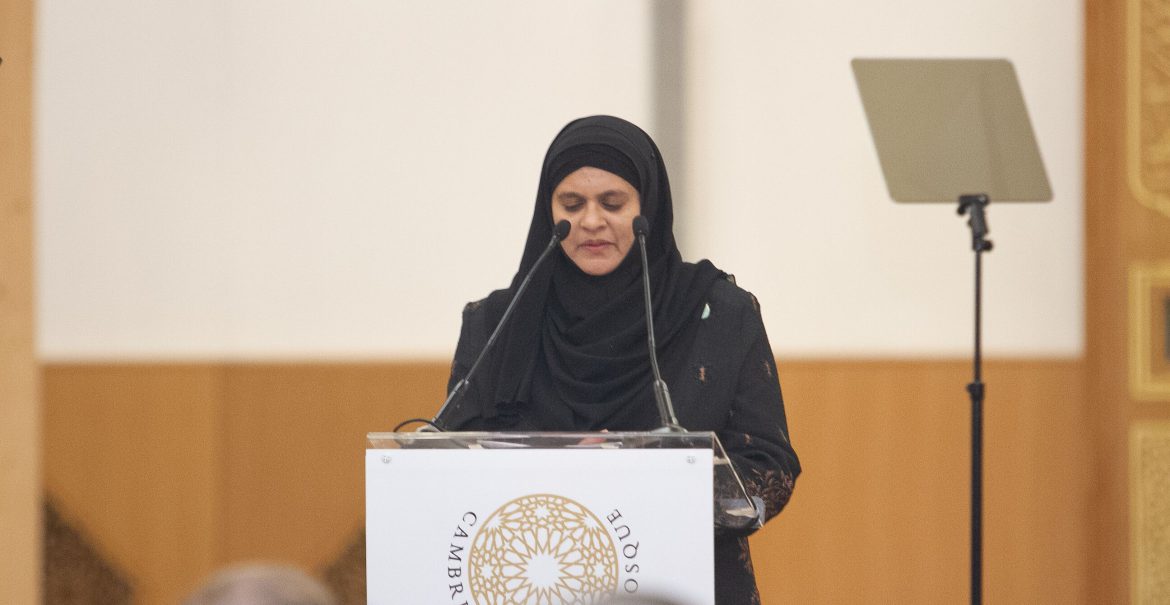 Bismillahir-Rahmanir-Raheem. Assalaamu Alaikum Wa Rahmatullahi Wa Barakatuhu. In the name of Allah, Most Gracious, Most Merciful. May the Peace and Mercy of Allah be upon you.

I’d like to first give you all a warm welcome to the Cambridge Central Mosque.

My name is Shahida Rahman. I am one of the Trustees of this Mosque, but more importantly I am a local resident of this great City of Cambridge where I have lived my whole life. My family has been part of the fabric of Cambridge for more than 60 years.

My late father came from East Pakistan (now Bangladesh) in 1957 and my mother followed in 1964 arriving at London Airport – not Heathrow Airport, as we know it today. It was one of the coldest winters on record in Britain and my mother still talks about it today. I am proud to say that my father established one of the first Indian restaurants in Cambridge called The Bengal, which was situated on Regent Street.

In those days, the Muslim community was very small, centred very much around this area of Cambridge called Romsey. Muslim families were few and far between, but we were one of them and one of the first.

For those of you who are not familiar with Cambridge, this Mosque is located on Mill Road, and my siblings and I were born at the Mill Road Maternity Hospital that was not far from here. It was originally a poor house built in 1838, which became a maternity hospital by 1948. In fact, my son has informed me that it is exactly 1,073 metres from here! I was born two days before the independence of Bangladesh, so I don’t need to tell you how old I am!

My earliest memory of school was drawing pictures for the Queen’s Silver Jubilee in 1977. My picture, a crown, was displayed in the school hall. I watched Play School, Bagpuss, Fingerbobs and, in the 80s, Grange Hill and The A-Team (the best Saturday night show on ITV) and, of course, not forgetting Doctor Who.

When we had the Friday congregational prayers called Jummah, it would be in someone’s house and sometimes it would be in our living room. Back then, everybody knew everybody else, but growing up in the 70s, we saw the size of our community grow and gradually change and, in recent times, more rapidly.

In the 1970s, the first mosque in Cambridge was at a house on Chesterton Road where my siblings and I attended Arabic and Qur’anic classes. In 1981, the Abu Bakr Mosque, also known as the Cambridge Mosque, opened on Mawson Road.

Our community grew to the extent that the physical requirements for prayer could not meet the needs of the community and one could argue that this “inconvenience” continued for many years with no end in sight. It has been said that “an inconvenience is an unrecognised opportunity”.

It was this “inconvenience” that galvanised our community and friends – both near and far – to realise the opportunity given to us, a responsibility given to us, to make it real, culminating in the building of this exquisite Mosque, completed earlier this year, that we are here to celebrate today.

Mill Road has always been a “community of communities” and when the early Muslims arrived, this was a foreign and unfamiliar land. For us, it is our home that we love. I am British, Muslim, and Bangladeshi. However, I do not look to perceive them as individual identities, isolated from one another, but as a combination; a mixture of all. Our Mosque reflects an amalgamation of identities and our journey into this “community of communities”, which is truly inspiring and humbling.

As one of two female Trustees, as well as the many female staff and volunteers we have here, we are leading the challenges of female inclusivity that is not just tokenism, but about participation and decision making. Women were heavily involved in the design of the Mosque and the garden was also designed by a woman, Emma Clark. We hope we can inspire and educate other Mosques to do the same.

The recent tragic events have affected the members of our great City. My heartfelt condolences go to the families and friends of Jack Merritt and Saskia Jones who sadly passed away in the London Bridge attack. We should be even more passionate and determined for our “community of communities” to work even harder, work even closer to foster and nurture tolerance and compassion in a world that sometimes seems to lack both.

As I look around today, surrounded by distinguished guests from all over the world who have come to celebrate this day in a 21st century mosque built for the future, this congregation reminds me of family, friendship and most of all the community that I love.

Thank you for being here today. I pray that you all enjoy the rest of your day.

This website uses cookies to improve your experience. We'll assume you're ok with this, but you can opt-out if you wish.
Accept Settings Read More

This website uses cookies to improve your experience while you navigate through the website. Out of these, the cookies that are categorized as necessary are stored on your browser as they are essential for the working of basic functionalities of the website. We also use third-party cookies that help us analyze and understand how you use this website. These cookies will be stored in your browser only with your consent. You also have the option to opt-out of these cookies. But opting out of some of these cookies may affect your browsing experience.
Necessary Always Enabled

By clicking "Enabled", you are consenting to us using cookies from Google Analytics. These are necessary to monitor statistics. If you do not want these cookies to be set, please click 'Disabled'.